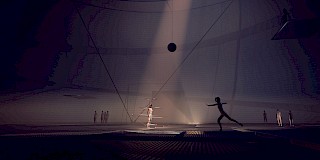 A virtual reality dance experience for man and machine 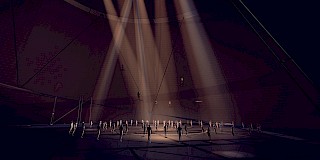 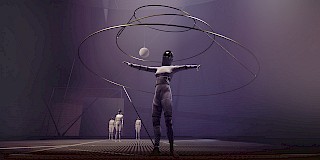 Bauhaus is 100 years old! As a laboratory of modernity, Bauhaus has developed innovations, experiments and new forms in the visual arts, architecture and design, theatre, dance, photography, performing arts and teaching. 100 years later we ask how artists today – as modern and radical as ever – can combine their visions of architecture, art and design and present them to the public.

Inspired by Oskar Schlemmers stage experiments and Gropius ideas of a Total Theater, an interdisciplinary team created a virtual world that invites visitors to interact with digital dancing figures. Fitted out with VR goggles and a controller, visitors embark on a thrilling journey through multiple levels of a vast, virtual stage space. For a duration of ten minutes, the relationship between humans and machines is experienced in a completely new way by means of joint dance in digital dimensions.

The Interactive Media Foundation has developed four innovative formats, three of them celebrated their premiere during the official opening festival in January 2019. For example the interactive virtual reality installation Das Totale Tanz Theater.

Das Totale Tanz Theater enables an integrated, immediate experience thanks to the interplay between the different arts and state of the art digital technology. Based on the Interactive Media Foundation’s idea and dramaturgy, the choreographer Richard Siegal has developed a piece of choreography that utilises body scanning and motion capture procedures to digitalise, being rearranged for the three-dimensional space. The experts at Artificial Rome took care of design of the scenography and costumes, along with the technical realisation. The dramaturgy is sustained by electronic music by the composer Lorenzo Bianchi Hoesch.

The project has been shown for the first time at the Academy of Arts Berlin in January 2019 and is currently on an international tour. All stopping off points can be found at www.dastotaletanztheater.com. 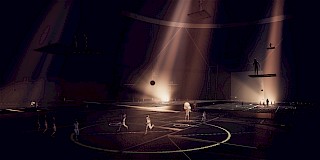 Based on the interactive virtual reality installation Das Totale Tanz Theater, and in partnership with the TV channel ZDF/ARTE, the Interactive Media Foundation has developed Das Totale Tanz Theater 360. During the around six-minute long 360° video, viewers are immersed into the elaborately designed virtual stage world, along with Richard Siegal’s choreography and a song created especially for the video by Einstürzende Neubauten.

„Das Totale Tanz Theater is a captivating illusion machine – spectacular as an experience, as a work of art, as a continuation and extension of the Bauhaus idea into the 21st century.“