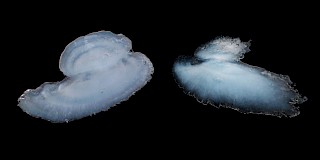 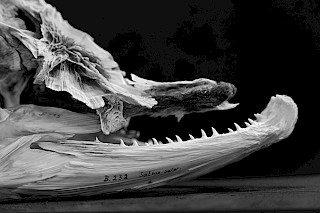 The salmon is revered as a mythical creature in many cultures due to its long migrations through seas and rivers. But it is also one of the most popular food fish in the world, and the farmed salmon industry is a rapidly growing economic sector.

Salmon farms are mass livestock facilities, designed for maximum efficiency right down to the farmed salmon themselves, which are also genetically manipulated. These breeding farms raise a number of environmental and ethical concerns.

And how does it affect an animal that by nature is designed for such a unique rhythm of life and long journeys when it is subjected to the monotonous, constricted, purely efficiency-driven operation of a breeding facility?

This was the inspiration for The Bone: it puts us in the headspace of a salmon and allows us to immerse ourselves in the streams of consciousness of wild and farmed salmon and their very different living conditions. The research and reflections of the eco-philosopher and salmon expert Martin Lee-Müller provide the basis for the narrative exploration of the consciousness of wild and farmed salmon.

In collaboration with the artist Michelle-Marie Letelier, the Interactive Media Foundation has translated this narrative into a virtual reality experience, thereby also drawing attention to the alienation of humans from nature.

Yoik songs of the indigenous Sámi people place the current iteration of The Bone in the traditional salmon areas of the North Atlantic. The increasing shift of salmon farming to the South Pacific and its impact on the local ecosystem and indigenous peoples will be included in the next phase of The Bone’s narrative.

The Bone is a project by Michelle-Marie Letelier, commissioned by the Screen City Biennial 2019, co-produced with the Interactive Media Foundation and Art Republic, co-created with Artificial Rome.

In October 2019 a first prototype has premiered at the Screen City Biennial „Ecologies – lost, found and continued“ in Stavanger.